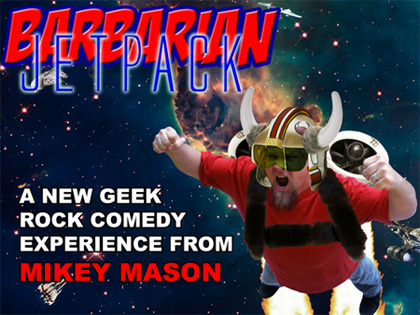 When I reviewed Mikey Mason’s Impotent Nerd Rage, I pointed out that it likely would have been on my best of 2011 list had I known about it in advance. If the new album is anything like the last one, I have a feeling this one will end up on my best of 2012. At the moment, however, it is in desperate need of funding, which is one of the reasons I wanted to be sure to promote it here.

I’ve decided to go with the $50 level this time, mainly because I’d love to see this funded (when I submitted this article, the funding was only at $1011 of $2500). This gets me the digital version, the physical version, a signed print of the cover, a t-shirt, my name in the album credits, and a personalized video of Mikey Mason drinking a craft beer. I have no idea how serious he is about the latter, but I’m tickled by the idea regardless.

Lower levels let you get the digital ($10) or physical ($20) album. You can even get the aforementioned personalized video at the $35 level. At the upper levels are some really interesting ones: $100 gets you a DVD of a rare live performance of Impotent Nerd Rage, $250 gets you a personalized song that could get on the album, and $1000 (or more, depending on how far Mason would have to travel) gets you a house concert. But for $10,000 (which is four times what he’s trying to earn for the entire Kickstarter), you get the following: “All of the above except that I will travel anywhere within the continental US to do the show, watch the movie, and run the game OR I will legally change my name to Captain Tightpants, the Dread Pirate Roberts, or Boba Fett: your choice. AND I will take you out to dinner (probably to a dive, but definitely somewhere I can procure a craft beverage to my liking) AND the song that I write based on the Concept or Title you provide (see the $250 reward tier) WILL be included on the album. Period.” So perhaps the next album will actually be credited as by “Captain Tightpants.”

I admit that I don’t always watch the videos for Kickstarters that I support. I’m so glad I watched this one. Mason created an entire song to encourage you to support his new album. It’s well worth a listen. Also, buried in the descriptions of the various reward levels (the $500 level) is a hint that there will be a video for “Me and Alan Moore’s Beard,” which is pretty awesome!

There’s still some time left on this one (July 10), but you should really consider helping to fund what will very likely be some great funny music.