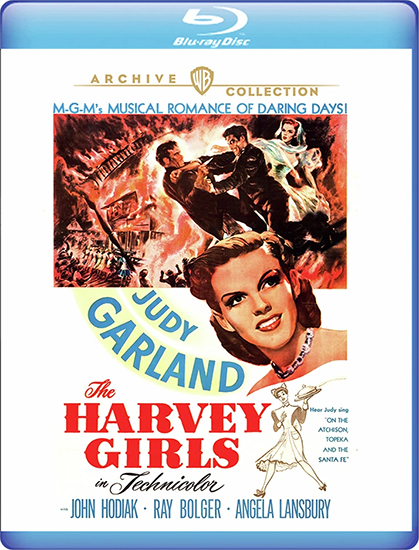 Judy Garland headlines The Harvey Girls, a joyous slice of Americana celebrating the “Harvey House” restaurants that brought extra helpings of civilization to the Old West. Famed M-G-M musical producer Arthur Freed brought together an impressive cast of talents for this box-office hit which features a delightful original score by composer Harry Warren and lyricist Johnny Mercer, who earned an Oscar for their On the Atchison, Topeka, and the Santa Fe as the Best Song of 1946. Garland once again shares the screen with her “Oz” co-star Ray Bolger, clowns with Virginia O’Brien, falls in love with leading man John Hodiak, and faces off against wicked saloon gal Angela Lansbury in one of the most entertaining and enduring musical classics to come from Metro’s golden age, now fully restored to its original Technicolor luster for its Blu-ray debut.

The Harvey Girls is now available from the Warner Archive, and we have one copy of the Blu-ray to give away to a lucky winner! You have from now through midnight Eastern time on the night of Wednesday, January 20, 2021, to get your entries in. Take a look at the form below to see all the ways you can enter.