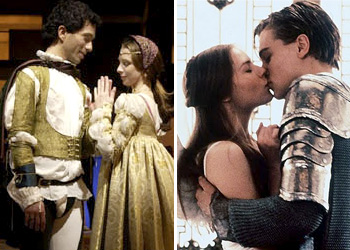 For this Adaptation Analysis, I dug into the works of one of my favorite authors of all time.  I am talking about the man, the genius, the legend: Mr. William Shakespeare!  Although there are many upon many adaptations of the Bard’s plays, the one that struck me as the one that really needed to be analyzed is the archetypal love story — that’s right, ladies and gentlemen, Romeo & Juliet.  This play was written early on in the Bard’s career and still remains, along with Hamlet, the most performed play of all time.  In this analysis I will be comparing the original stage play to the 1996 feature length motion picture modernization directed by Baz Luhrmann.  I will be analyzing three aspects of it: 1) the story, 2) the characters, and 3) the presentation.

In both of these productions the story itself remains quite the same.  The Chorus states the prologue in the stage play, while in the movie the prologue is told by both a TV news reporter and by Friar Lawrence. The Montague/Capulet grudges against each other have sparked into their third outbreak and, as usual, Tybalt of the Capulets and Benvolio of the Montagues are the two lead youths who either want to escalate it or resolve it.  We have Escalus trying to keep the peace as best as he can.  Meanwhile Romeo is being a lovesick emo boy pining for the chaste Rosalind as his cousin, Benvolio, and his friend Mercutio try to get him out of that rut and find a new love to pursue.  They do so at a party hosted by the Capulets where Romeo meets and flirts with Juliet of the Capulets.  Cue the love themes in the scores and the infamous balcony scene and, in the case of the ’96 movie, the pool scene. (This difference will be dealt with in the presentation section below so don’t worry about it now.)  So the two young lovers consummate their love by agreeing to marry each other and all goes swimmingly… NOT!!! 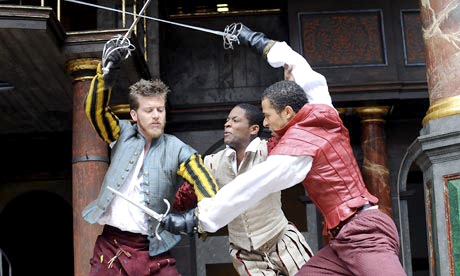 While the two lovers are making their plans, the youths of Verona get rowdy and sure enough it’s “Capulet vs. Montague: Round 4!”  However this time it does not end well: Mercutio, having sided with Benvolio and the Montagues, dies in the arms of Romeo, who has come to try to put an end to the enmity.  Romeo, majorly pissed off at Tybalt, goes off and a chase ensues through the streets of Verona that ends up with Romeo killing Tybalt and fleeing away, though not before spending the night with his young bride, Juliet.  After the Prince clears things up in the aforementioned brawl, he sentences Romeo to exile in Mantua.  While Romeo flees, Lord Capulet has betrothed Juliet to Prince Paris, a cocky upstart from Escalus’s court.  After a case of domestic disturbance, no cops involved,  Juliet goes to Friar Lawrence and threatens suicide.  Friar Lawrence conceives a plan to get everything cleared up.  This plan, however, involves ingesting a tranquilizer and doing a lot of long-distance communication.  The only problem is that Romeo gets the wrong message and decides to do something drastic; he reasons that if Juliet is dead then the only place they’ll have peace is in the afterlife. 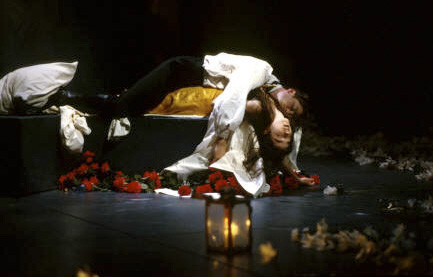 Now here is where the two presentations differ greatly from each other.  In the stage version, Romeo acquires some poison from an Apothecary in Mantua, while in the movie the Apothecary is located back in Verona City.  After getting to the graveyard, on the stage, Prince Paris and Romeo duel in the Capulet Crypt with Paris’s life ending as Romeo ventures further to be with his beloved.  Meanwhile, in the film, Paris does not appear at all in those last scenes; we do know that he lives, but we don’t know what happens to him in the end.  Now when it comes to those two ‘star-cross’d lovers’ offing themselves it is done rather differently in the two versions.  Don’t worry, Romeo still dies from the poison; however, Juliet’s ‘true’ death is paced rather differently. On the stage she discovers Romeo’s corpse and then plunges his dagger into her heart, while in the film she catches Romeo in the act and tries to stop him but it comes a little too late, so, overcome with grief, she takes his Sword 9mm. and shoots herself in the head.  The final lines in the stage play are given by Escalus, who also gives some of the final lines in the film, but the very final lines of the text are given by the TV news reporter.  The cast comes to the stage and gives the old company bow and the credits roll, respectively.

The characters in both versions remain quite the same except for a few noticeable differences.  In the movie, the Montagues are represented as rich white yuppies, while the Capulets are portrayed as the rich Hispanic guys à la Scarface (FYI this will be explained below).  Romeo and Juliet in the stage version are a bit spoiled and behave in the same manner that you would expect hormonal teens in medieval times to have behaved, while in the movie Romeo (Leonardo DiCaprio) gives off the feeling of the ‘poor’ little rich kid and Juliet (Claire Danes) is portrayed as this little ‘sheltered’ princess from the outside world.  As for the rest of the kids, in the movie and the stage, Tybalt (John Leguizamo) is an aggressive S.O.B. who loves to fight against the Montagues, while Benvolio (Dash Mihok) is, as his name suggests, benevolent.  He is the true peaceful soul of the bunch, always trying to avoid conflict whenever possible.  Now we come to Mercutio, the comedian of the group and also the one who has the most pent up anger, who is portrayed masterfully in the film by Harold Perrineau as a joker with a dark side.  Paris is portrayed in both as a snobbish rich kid from the ruling class, embodied in the film by Paul Rudd.  As for the other characters they are portrayed almost the same way.  Some of the big actors playing the other characters include Paul Sorvino as Lord Fulgencio Capulet, Diane Venora as Gloria Capulet, Jesse Bradford as Balthasar, Jamie Kennedy as Sampson, and M. Emmet Walsh as the Apothecary.  One person that deserves noting is Pete Postlethwaite as Friar Lawrence — his friar is like no other friar has been portrayed.  He portrays the Friar as a flawed one that has learned to keep up with the times.  All in all the characters are both very similar and very different in the two versions.

On the stage, the setting is in medieval-esque Verona and Mantua.  The cast wears period clothing and fight with swords, daggers, and such.  This is not so in the film version.  In the film, Verona is presented as an analogue to Miami and Mantua is treated as a backwoods trailer park.  The characters dress in different modes; the Capulets dress in formal dapper wear, while the Montagues dress in colorfull Hawaiian-styled short-sleeved opened shirt with slacks.  The weaponry is modernized to go along with the setting: instead of swords and such, Montagues and Capulets fight each other with Sword S. 9 mm. handguns, Rapier pistol favored by Tybalt, Dagger pistol favored by Mercutio, and Ted Montague’s Longsword shot-gun.  Also in this modernization, the people travel by really tricked out and seemingly expensive cars.  This film can be seen as the Romeo & Juliet version for the MTV generation.

I could go on, and on and on about the different adaptations of Romeo & Juliet throughout the years… suffice it to say I would be here till the sun explodes.  Even though there have been other adaptations, successful or not, the Luhrmann modernist view on it remains, since its debut in 1996, one of the most used adaptations of the play.  I can personally vouch for that due to the fact that when I was a freshman in high school, this was the version used, in conjunction with the text, to educate us and serve as an introduction to Elizabethan Literature.  To paraphrase the Bard himself, I hope that my toil here has mended the strife betwixt the stage and the screen.