With the impending opening of the Coen Brothers’ remake of 1969’s True Grit, where Wayne’s Oscar-winning role is being re-interpreted by Jeff Bridges, this seems a good time to revisit some interesting facts about this star of stars.

Named Marion Robert Morrison at birth (his middle name was later changed to Mitchell), and credited under several different names when he began making movies, Republic Pictures finally came up with the winner: John Wayne. No name really matters though, because he liked to be called “Duke.” He said if someone called out “John,” he didn’t recognize it as his name. He liked Duke. In a 1971 interview in Playboy, Wayne was asked about this nickname. He said, “That goes back to my childhood. I was called Duke after a dog — a very good Airedale out of the Baldwin Kennels.”

Looking down through sky-blue eyes from a height of 6’4″ and gracefully hauling 244 rugged pounds, Wayne is the only deceased star on the Harris Poll, and the only one who has appeared on the poll every year since it first began in 1994. The 2009 Poll placed Wayne sixth among America’s favorite film stars, beating out Meryl Streep, Morgan Freeman and Julia Roberts. He is one of the Top Male Stars of all time on the American Film Institute List, and it’s unlikely he will ever be off it. He was on the list of Top Ten Box Office Stars for over 20 years, and his TV special blasted the Nielsens so high, it was rerun just a few months later, landing him on the Gallup Poll as one of the nation’s most admired people. In 1926, his first year in films, he made three of them: as an extra in The Great K & A Train Robbery, a football player in Brown of Harvard, and a guard in the swashbuckler Bardelys the Magnificent. He was the first Western movie hero to sock a hell-bound villain in the chops; usually managing to keep his “John hat” (John B. Stetson) on his head and, after as many as 11 movies a year, he finally achieved the stardom he’d hold onto for the rest of his life (and in his afterlife), as the Ringo Kid in John Ford’s 1939 classic Stagecoach.

Of the origin of his screen image, Wayne said: “They made me a singing cowboy. The fact that I couldn’t sing — or play the guitar — became terribly embarrassing to me, especially on personal appearances. Every time I made a public appearance, the kids insisted that I sing ‘The Desert Song’ or something. But I couldn’t take along the fella who played the guitar on [the other] side of the camera and the fella who sang on the other side of the camera. So finally I went to the head of the studio and said, ‘Screw this. I can’t handle it.’ And I quit doing those kind [sic] of pictures. They went out and brought the best hillbilly recording artist in the country to Hollywood to take my place. For the first couple of pictures, they had a hard time selling him, but he finally caught on. His name was Gene Autry.”

One of Wayne’s finest roles was that of Ethan Edwards in one of the all-time greatest Westerns ever filmed: The Searchers (originally serialized as The Avenging Texans). In 2006, Premiere Magazine ran an industry poll in which Wayne’s portrayal of Ethan Edwards was rated the 87th greatest performance in film history. As described in Michael F. Blake’s Code of Honor: The Making of Three Great American Westerns, the script described Ethan Edwards thusly: “A man as hard as the country he is crossing. Ethan is in his forties, with a three-day stubble of beard. Dust is caked in the lines of his face and powers his clothing. He wears a long Confederate overcoat . . . His saddle is Mexican and across it he carries a folded serape in place of the Texas poncho . . . Rider and horse have come a long way . . . strapped onto his saddle roll is a saber and scabbard with a gray silk sash wrapped around it.” Wayne wasn’t only a huge man and a huge star, he also had huge interests — including politics, although he chose not to serve as vice presidential running mate to George Wallace, not even at the urging of a Texas billionaire buddy; if he had, American history would probably have had a President Wallace. Wayne admired General Douglas MacArthur’s politics, as well as those of “the tie salesman. President Truman. He was a wonderful, feisty guy who’ll go down in history as quite an individual.” After seeing Wayne’s performance in Sands of Iwo Jima, General MacArthur told him “You represent the American serviceman better than the American serviceman himself.” I’m sure that, under tough-as-nails Marine Sgt. John Stryker’s battle helmet, Wayne was wearing a Stetson.

At the time Playboy editor Richard Warren Lewis conducted the Wayne interview, Wayne was driving a “dark-green Bonneville station wagon, a production model with only two modifications — a sun roof raised six inches to accommodate the driver’s 10-gallon hat, and two telephone channels. . . .” He had a boat, too, though “boat” seems such a little word for a converted U.S. Navy mine sweeper from World War II refitted as a cruiser: Wild Goose II. At lunch aboard the Wild Goose for the interview, Wayne named his favorite tequila as Conmemorativo. “That’s as fine a liquor as there is in the world,” he said. In the drinks that day, there were “heaping ice shards that, Wayne said, had been chopped from a 1000-year-old glacier on a recent Wild Goose visit to Alaska.”

Wayne chewed tobacco since college (USC) and was asked, “You chew, but you don’t use drugs. Do you still have as much drink, food and sex as you used to?” He replied, “I drink as much as I ever did. I eat more than I should. And my sex life is none of your goddamn business.” That may be why one of the next questions was “You seem to have a very blunt way of dealing with people. Why?” And he answered, “I’ve always followed my father’s advice: He told me first, to always keep my word and, second, to never insult anybody unintentionally. If I insult you, you can be goddamn sure I intend to. And third, he told me not to go around looking for trouble. . . . Well, I guess I have had some problems sticking to that third rule, but I’d say I’ve done pretty damn well with the first and second. I try to have good enough taste to insult only those I wish to insult.” Wayne had a definite opinion about violence in movies, one that’s as relevant today as it was back then: “Every time they rate a picture, they let a little more go. Ratings are ridiculous to begin with … Movies were once made for the whole family. Now, with the kind of junk the studios are cranking out — and the jacked-up prices they’re charging for the privilege of seeing it — the average family is staying home . . . Pictures go too far when they use that kind of realism, when they have shots of blood spurting out and teeth flying, and when they throw liver out to make it look like people’s insides . . . They seem to forget the one basic principle of our business — illusion. We’re in the business of magic. I don’t think it hurts a child to see anything that has the illusion of violence in it. All our fairy tales have some kind of violence . . . Why do we have to show the knight spreading the serpent’s guts all over the candy mountain?”

Although Rooster Cogburn was not above using a few choice swear words, Wayne had not used any in movies prior to True Grit. He said “It’s profanity all right, but I doubt if there’s anybody in the United States who hasn’t heard the expression ‘son-of-a-bitch,’ or ‘bastard’ . . . At the emotional high point in that particular picture, I felt it was OK to use it. It would have been pretty hard to say ‘you illegitimate sons of so-and-so’!”

Basically, said Wayne, Rooster Cogburn’s attitude toward life “was maybe a little different, but he was basically the same character I’ve always played.” In his Best Actor Oscar acceptance speech, Wayne said, “If I had known this, I would’ve put that patch on thirty-five years earlier.” 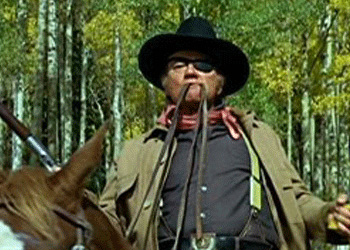 When asked if he thought True Grit was the best film he’d ever made, Wayne replied, “No, I don’t. Two classic Westerns were better — Stagecoach and Red River — and a third, The Searchers … and The Quiet Man was certainly one of the best.

He basically played the same part in most of his films, the part of John Wayne himself. The audience was always aware they were watching John Wayne, no matter how fine his acting was. John Wayne himself had a personal code: “Tomorrow — the time that gives a man or a country just one more chance — is just one of the many things that I feel are wonderful in life. So’s a good horse under you. Or the only campfire for miles around. Or a quiet night and a nice soft hunk of ground to sleep on. Or church bells sending out their invitations. A mother meeting her first-born. The sound of a kid calling you Dad for the first time.”

“There’s a lot of things great about life. But I think tomorrow is the most important thing. Comes in to us at midnight very clean, ya know. It’s perfect when it arrives and it puts itself in our hands. It hopes we’ve learned something from yesterday.”

Wayne seems to sum up America today … just like always.