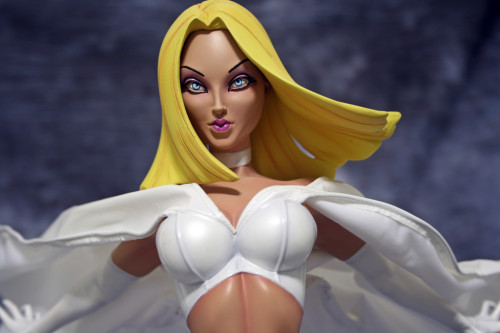 Emma Frost is firmly ensconced in the number three position on my list of Marvel Comics characters (just below Daredevil and Elektra, if you’re counting). It shouldn’t be a surprise, then, that I was super excited when Sideshow Collectibles announced that she’d be the next character adapted into their premium format figures line. Here’s a look at how this version of Emma turned out.

Sideshow’s premium format series is distinguishable from their other statues in that it incorporates some sort of mixed media into the sculpture, in addition to the usual polystone. This usually means there’s a polystone figure with actual fabric clothing, although occasionally the mixed media turns out to be something like metal or rooted. The Emma statue is the usual sort of PFF, comprised of a polystone figure with mixed media clothes attached. Emma’s superhero bra is sculpted on, but her pants and cape are vinyl. The pants are attached firmly and tightly to her legs, but the cape is free-flowing behind her. In a very clever bit of engineering, four flexible wires are sewn into the cape, allowing it to pose in any number of ways. 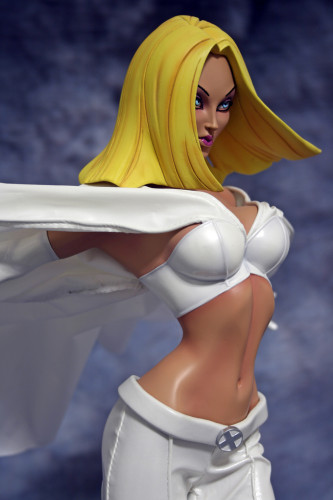 The collectible comes in four pieces in the box: the main figure, the base, and Emma’s two arms which attach easily via a magnet system in her shoulders. Once assembled, Emma’s pose is an epic and dynamic one. She’s standing atop a highly detailed pile of rubble, stepping forward with her arms thrust out to the sides and behind her. The wind is whipping her hair to the side, and her cape (if posed as intended) is billowing out behind her. This really is one of my favorite designs Sideshow has done for a premium format figure, my Emma fandom aside. 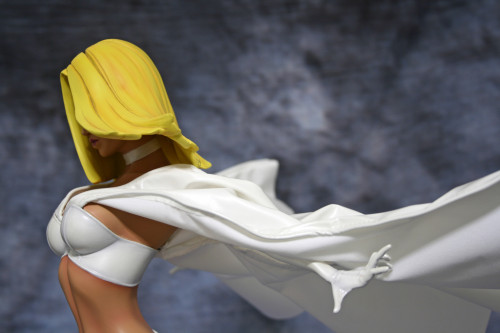 From the neck down, Emma is perfectly in line with her comic book origins. The sculpt, paints, and tailoring all are first rate and gorgeous. Her head is a matter of debate among collectors, however. Rather than give Emma a more realistic likeness like they did in their previously released Emma Frost Comiquette, Sideshow chose to give her a more cartoony look, somewhat similar to the art of J. Scott Campbell. She has a very angular face with big eyes and a small, puckered mouth. If you’re not into this cartoony style, the less realistic face could be a dealbreaker for you on this otherwise spot-on statue. If you’re cool with the face, this is an amazing Emma Frost collectible. To be honest, I’m wavering on my opinion of the face design. It’s not horrible, but I really would have preferred a more “real” look. You can check out the photos and make up your mind before you drop the cash. And hey, if you’re enterprising, you can always modify the cartoony face to suit your tastes. 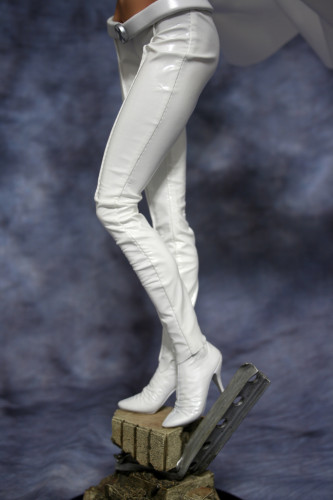 Emma is in 1/4 scale, towering 21″ tall from the top of her head to the bottom of the base. She really is a massive statue and will display well alongside Sideshow’s other Marvel 1/4 scale statues. The standard version of Emma is limited to 750 pieces, but the Sideshow exclusive version that comes with an alternate hand holding Cyclops’s visor is limited to just 500.